The Rangitīkei Youth Awards is Council’s way of recognising the achievements of the amazing youth in our district. This year the awards were proudly sponsored by John Turkington Forestry, with each of the category winners receiving $500 kindly donated by individual sponsors as noted.

Around 300 young people and their families attended the award ceremony at the Marton Memorial Hall on 23rd May 2019.

We are proud to announce the winners of each category as listed below:

Alyce Turner- Giving Back - Winner Sponsored by The Downs Group

Alyce was responsible for the formation of the Rangitīkei College Rotary Interact Group. She was instrumental in the initiation of the process of becoming chartered as well as the key driver for many of the projects they have undertaken thus far. She has led the group in identifying various environmental needs in the community and ensured that action has followed to create real impact. She has further ensured youth participation in any opportunity to give back to the community and takes the led in rounding up crews to pitch in at events such as Market Day, Harvest Fair Rotary Pedal for Pleasure.

Jacob Carlyon- Giving back -- Runner Up Sponsored by the Downs Group

Jacob has a passion for Sport, Exercise and wellbeing, and has worked to share that passion with others. He voluntarily ran trainman programmes for interested students at lunchtimes in Rangitīkei College weights room using his knowledge and experience to benefit others. In his time since leaving school he has become a qualified personal trainer working at the Rangitīkei Gym. As part of his giving back he is working with the college Physical Education department on some ideas to introduce student to the benefits of regular and sustained physical activity and linking that to the gym. Jacob has also impacted our community in his work as a volunteer firefighter, also presenting the benefits of this opportunity of service to the senior students. Perhaps the ultimate act of giving back was his recent resuscitation of a member of the community. 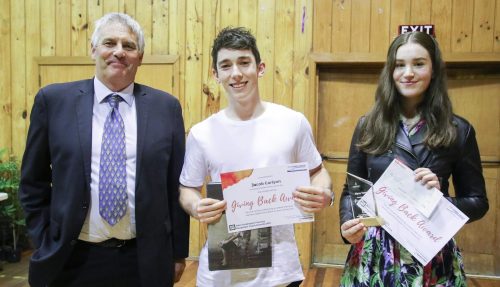 Bridget is Head Girl of Nga Tawa Diocesan School and has been exemplary in all aspects of her life, academic sports and culture. Having self-leadership has seen her gain nothing other than excellence in Biology, chemistry, physics Physical education and Mathematics with Calculus - all of which has seen her achieve scholarships at both the Auckland and Otago University. Bridget truly wants the best for those around her and understands the value in servant leadership demonstrated in a multitude of ways including refereeing junior hockey, giving time to the local food bank, Whanganui Women’s Refuge, UNICEF and a homework club in a local primary school. Bridget’s commitment to supporting those who need a bit of extra care, willingness to attend funerals and other events that impact on staff and students, and her genuine concern is the hallmark of this year’s Rotary Club of Marton Leadership Award. 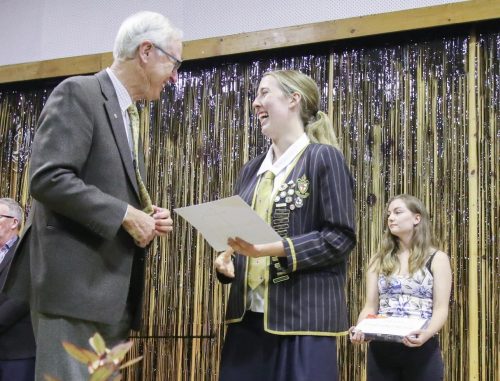 Jodie was awarded Dux at Rangitikei College and received a scholarship in Physical Education. Her leadership has been demonstrated through many ways especially in her consistent and avid support of sport in the community. Jodie led the school preseason Hockey training, captained the Girls hockey for two years and further led by example focusing on team culture and achievement. Her reach into the community included teaching local 5 and 6 years old's basic hockey skills and coaching the Sth Makirikiri Year 5-6 hockey team who placed 2nd in their competition. Jodie has ignited a passion for hockey in the district that will last for years to come. Jodie also initiated the student council to buy new penalty corner masks for the Hockey teams after identifying potential safety hazards and organised fundraising to procure a wheelchair for students to use when injured so they still have mobility access around school. 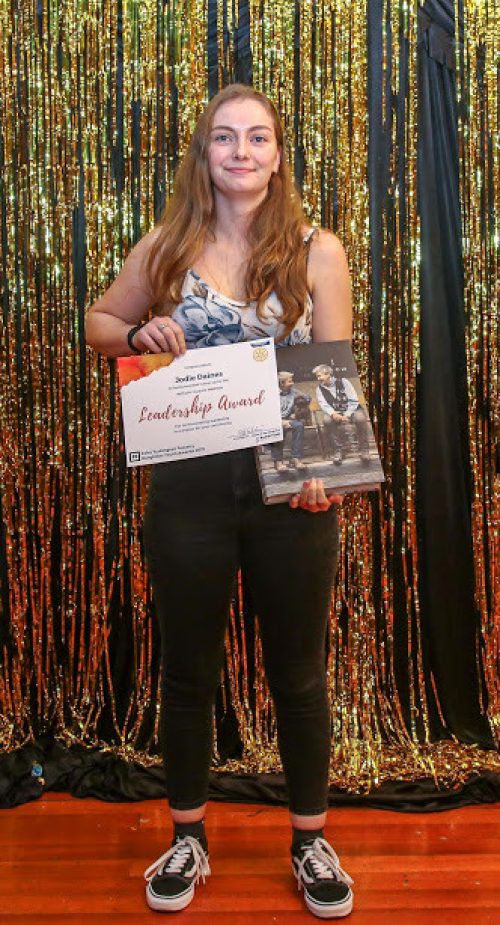 Daisy is a founding member of the Nga Tawa Enviro Group created in 2015 when they became first embarked on becoming an Enviroschool. Daisy was the most regular member of the group getting involved in all the initiatives undertaken including waste audit, creating a worm farm, improving school wide recycling and the nga Tawa native bush project. Daisy has a keen interest in how young individuals can make a positive difference in their communes and the wider world which was fueled by her successful application to attend the Sir Peter Blakes Youth Enviroleaders Forum. Daisy was integral in starting the Rotary Interact environmental group and is currently in Sweden on a Rotary exchange.

The Rotary Interact Group of Rangitikei College was formed part way through 2017 and have been working of projects that protect and enhance the environment ever since. To list but a few
• The River and path clean up of the track known as ‘The Lost Acre, along with future planning of the area
• Tree Planting at the Marton Dam
• Attending the Rangitikei District Council Environmental conference to discuss and contribute to ideas and projects to meet the councils strategic aims.
This is student group that is led by students and entirely driven by students. 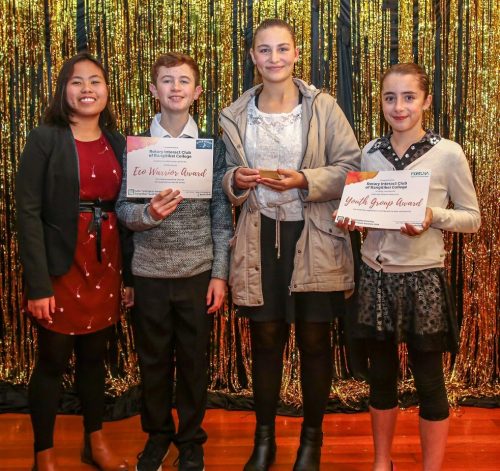 Tia has been an outstanding role model for success in the Arts over her entire school career, and her work as a musician has really been an excellent motivation for other students to get involved in the performing arts. Tia led the Rangitikei College Kapa Haka group in 2018 winning the school award for commitment and dedication to tikanga Maori. Tai competed in the national rock quests competition achieving the
• Whanganui regional best song award in 2015
• Regional Lyric writing award in 2016
• Regional Pacifica Beats awed in 2017
• and in 2018 placed 1st in the Solo/Dual category at the Whanganui Regionals.

Lydia is highly supportive of others which has gained her leadership roles including Head of Humanities and head of the UNICEF club where she organised all of the fundraising projects. Lydia instigated the UNICEF club at Nga Tawa in 2017 after a personal response to the plight of Syrian refugees. She inspired the school community through education to make a significant response and send funds to support particularly women and children. Lydia and her team catered for all the house events, providing afternoon tea for families raising over $1000 at each event.

The best way to some up Onyx’s exceptional sporting achievements is simply to list them
Boxing titles:
• Manawatu regional champion
• Auckland regional champion
• Central North Island Regional Champion
• Tongan National Champion
• Western Australian Champion
• Queensland Golden Gloves Champion
• NZ Golden Gloves Champion
• ANZAC super series Champion
• New Zealand Champion
In 2018 he was awarded the most Scientific Boxer award at the central North Island Champs and at the NZ national Champions. He finished the year the #1 ranked junior boxer in NZ across all weight divisions. He also managed to pick up the Klitscher Cup in 2018 after being awarded honors for boxing and being the senior boys champion.
If boxing wasn’t enough - he also won the Marton Harrier Club cup for being the 2018 intermediate boys cross country champion.

Georgina stood out for her contribution to her own sporting success along with her support for other young people in sport. Georgina is a national and international Representative in Triathlon, making the World Triathlon Champions in 2018 for the 16-19 age group team and has qualified again in 2019 to attend the World Champions in Switzerland in the Under 19 team.

Following Sophie’s own experience on a 10- day Spirit of Adventure voyage, she return to Rangitikei College with a plan to how she could send a group of 10 Year 10 students on a shorter 5 Day Trophy Voyage. With a target of $13000 Sophie kicked into fundraiser mode and with determination along with support of the school staff and students reached that financial goal.
Her leadership continued on their return where Sophie organised afternoon tea to thank members of the public that helped the group. She further encouraged and supported the Year 10’s, to speak to the Freemasons and Rotary about their experience, a daunting task for any 14 years old.

Tia has been an outstanding role model for success in the Arts over her entire school career but particularly in the past year. Her work as a musician has been an excellent motivation and her leadership has encouraged other students to get involved in performing arts and take the most of the opportunities they are given at the school. She has shown her fellow students that they can achieve at a high level despite coming from a small school in a small town.

This group has made a huge contribution to the community, not just in the environmental pursuits outlined earlier but also through accelerating their learning by attending the Interact conference in Levin to share ideas about projects and service with other groups.
• Volunteering for the Rotary Club of Marton at fundraising events by helping with gardening projects
• Volunteering for Project Marton during the annual events of Market Day and Harvest Fair
• Volunteering for Shed Tours with Lions Man shed day.
• This one youth group is involved in many aspects of the community.

MaD is an anagram for Making a Difference. This recently formed group is already making a difference in their hometown of Taihape and across the district. They have been involved in replanting at the rear of Taihape Memorial Park alongside Rangitīkei District Council and the Department of Conservation.
Alongside DoC they have assisted in pest control at Bruce Park, just south of Hunterville. The MaD group has fundraised to support the NZ Under 19 River Rafting Boys team travel to Argentina for the World Championship and fundraised to support young ladies from Waiopeheu College in Levin with their trip to Vanuatu completing their Rotary project Days for Girls.

Todd started his apprenticeship in 2015 and is employed by Richer d Ellery form Richards Construction Ltd. Thought his apprenticeship Todd’s attitude has been of the highest standard, always well prepared and has excellent communication skills. He has the practical ability to forward think and steps up to any challenge. Starting his apprenticeship under the guidance of his foreman Todd has progressed to working without supervision and has further stated to to take on a leadership role with younger apprentices. Todd finished in the top 10 Apprentice of the Year completion in 2018.

Jacob Davidson started at Alf Downs as ‘Friday Boy’ a traditional role in the company that allows someone to demonstrate their work ethic before earning a trade apprenticeship. Needless to say Jacob proved himself! On successfully completing this apprenticeship he’s been given another opportunity to train as a Line Mechanic, effectively giving him a dual qualification. Jacob is a great role model proving that with a positive attitude, good work ethic and ability to gain respect form colleagues you can achieve great things.

During his employment at Hautapu Haulage Kevin O’Brien says that Shawn has impressed with his growth in the role, sector and his own personal development. He was first noticed when working for Hautapu Pine Products particularly for his stamina, politeness and work ethic to stick to a job and do it to the best of his ability. From the age of 19 he showed an eagerness to become a truck driver, a license that takes years to achieve. When he turned 21 he successfully gained is 5 HT license. Shawn is driven to do his best and diligently completes all necessary documentation, maintenance checks and paper work. He is a great role model for youth proving that if you want something bad enough - to work for it - to sacrifice for it and push through the hard times - you can achieve it!

Jacob found his passion for Physical Education while at Rangitīkei College and through his last year started training as a Personal Trainer at UCOL completing his certificate after finishing college. His passion, work ethic and nature of wanting to help others landed him employment at Rangitīkei Gym. With strong connections to Rangitīkei College and throughout the community Jacob encourages others to find their passion in fitness and well being and works on building his connections into the gym.