A brief history of Rangitīkei:

The Rangitikei was one of the first Counties constituted under the Counties Act 1876 when the Provincial system of Government gave place to the County system.

The area was first populated by Ngati Apa - a proud and aristocratic tribe from the Aotea canoe - with a number of pa from Onepuhi down to Parewanui about 13 km from the mouth of the Rangitikei. In the early 19th century they suffered severely at the hand of Te Rauparaha of the Ngati Toa, and Ngati Ruakawa, which greatly lessened their power and influence. 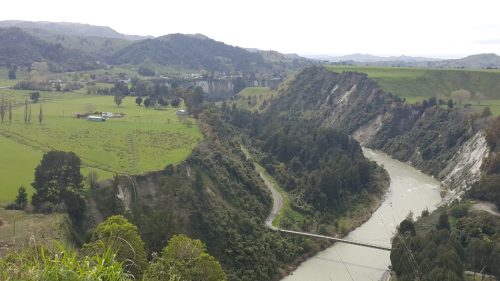 Much of the Rangitikei was a gigantic stand of native bush when the first settlers arrived. During the 1840s a number of settlers made agreements with Maori owners for the settlement of the land within the Rangitikei District. Many travelled up the coast from Wellington and crossed the Rangitikei River in a ferry operated by Thomas Scott. Without roads, the first settlers were restricted to the windswept coastlands and along the two boundary rivers. In 1849 the Crown negotiated a land sale with the resident Ngati Apa tribe and Te Rauparaha (who still wielded powerful influence) for the Turakina block through the then Land Commissioner Donald McLean for resale to the settlers. At first, the settlement was along the two rivers, from the Turakina River to Bonny Glen and stretched along the Rangitikei River from Parewanui to Porewa and Rata and only later from Porewa to Tutaenui, by 1858 the district was well settled.

In 1868 the coaching days commenced, Rangitikei's town of Marton became linked by road with Wellington and Wanganui, Cobb & Co coaches travelled twice weekly between these towns. The roads were rough, the bridges and fords many, yet the link was always kept. The first railway was opened in the district in 1878 from Marton to Turakina followed by Halcombe to Marton and Foxton to Wanganui the same year.

By 1884 the road from Napier had reached Moawhango. There had been some progress in the roading from the south. In 1883/4 John Rochfort, a Government surveyor created the route for the railway line from Marton through the upper Rangitikei and Hautapu districts to Te Awamutu. Rail paid a large part in the early development of the Taihape township, the railway station was completed in 1904, by 1909 there were 23 railway houses.

Adam Glasgow was the first white man to live in the Rangitikei, living with a Maori tribe in Turakina. In 1841 the Glasgow family welcomed Scotsman Alexander Grant an early settler in Turakina, he was a surveyor from Wellington and New Plymouth before settling in the Rangitikei.

The first meeting of the Rangitikei County Council was held in 1877.

For quite some time the site destined to become Bulls township was known as "Daniell's Bush". In 1855 Captain Edward Daniell established "Killeymoon Homestead" in the middle of the area which encompassed the future Bulls and up to Curls bridge. In 1870s early settlers gave the name of "Bulls" to their town, named after James Bull, the carpenter from Chelsea in London who made his way to New Zealand in 1857 and progressed from leasing a 5 acre section from Daniell to founding a whole town. Mr Rangi Reweti was the first Maori member elected in 1968, to the Bulls County Town Committee, although Bulls became a township in 1873 nearly 100 years earlier.

The first meeting of the Bulls Local/Town Board was held in 1873.

The first place to be designated a town was Crofton, a general-store post office was built and the land was subdivided into half acre sections. These were offered free to any person who built on them within two years. The only stipulation was no liquor was to be sold from any premises erected, thus ensuring a hotel-free township. Land was finally purchased and laid out for the town of Marton - then known by the Maori place name of Tutaenui - the name was changed to Marton in 1869 after the birthplace of Captain James Cook.

The first meeting of the Marton Borough Council was held on the 1st September 1879.

Early settlers in Taihape were never quite satisfied with the name of their village. Originally the area was known as Korohonui, then Collinsville after a Christchurch man named Collins who sponsored a scheme to send a party of Canterbury settlers to the township in 1894. The name of the town was later changed to Hautapu, then Otaihape and finally to Taihape.

The first meeting of the Taihape Borough Council was held in May 1906.

The settlement of Hunterville took place around 1884.

The first meeting of the Hunterville Town Board was held on the 3rd May 1905 when they took over control from the County Council.

Approximately 1975 Hunterville became a Community Town, once again operating under the jurisdiction of the Rangitikei County Council.

The first meeting of the Mangaweka Town Board was held in June 1910.