Kuripapango Bridge to be closed for strengthening work

The Kuripapango bridge will be open to cars and vehicles under 22 tonnes during all public holidays.

For full bridge closure and opening times, please find below a link to the Hastings District Council;

Kuripapango Bridge on the Hastings/Taihape Rd is to be closed to daytime traffic on weekdays for three months for strengthening work to be undertaken, in line with Government requirements.

The bridge, which is located about 57kms from Hastings city, will be closed and work begin on Monday, March 1, the project expected to take until May 31.

During this time the bridge will be fully closed from 9am to 6pm on Mondays and Fridays and 7am to 6pm on Tuesdays, Wednesdays and Thursdays – but will be open to vehicles weighing under 22 tonnes in the weekends.

In addition, vehicles under 22 tonnes (eg car, ute, trailer, empty truck) can use the bridge at night between 6pm and 9am Mondays and Fridays, and between 6pm and 7am on Tuesdays, Wednesdays and Thursdays.

The work is needed to comply with the Government’s Land Transport Rule: Vehicle Dimension and Mass 2016, which meant roads and bridges must accommodate greater vehicle weights and dimensions than previously.

The rule’s objective is to make the country’s farms, forests and freight industry more efficient and profitable by allowing increased loads to be transported, reducing the number of trips required.

Currently able to take a weight of 44 tonnes, after strengthening this single lane concrete and steel bridge will be able to carry 62 tonnes, and will be wider to better manoeuvre the tight approaches to and from the bridge.

Hastings District Council Deputy Mayor and Ward Councillor Tania Kerr acknowledged it was a long time for the road to be closed, but said to do anything other than full closure would further extend the duration of the works, making it inconvenient for longer.

“We want to thank those people who use it most for their patience while this necessary work is being carried out to improve efficiency and productivity.

“In addition, this road can be an alternative to State Highway 5 so this project will help ensure Hastings is not cut off should SH5 be closed for any reason.”

In the event of an emergency such as a fire where people needed to evacuate, workers would clear the bridge within 30 minutes allowing cars to pass over it.

The council’s overall bridge strengthening programme was consulted on as part of the Long Term Plan 2018-2028 and to date four bridges on Taihape Road have been upgraded (Pukehamoamoa, Kawera, Blacks and Tois).

Kuripapango Bridge is the final one to make the Hastings/Taihape route compliant with the legislation. 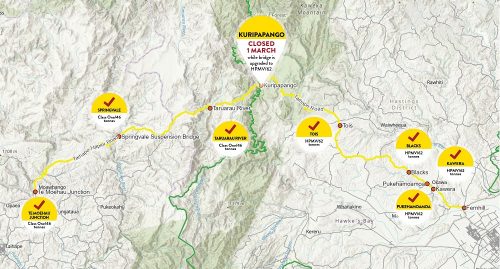